“When I was young, I used to admire intelligent people; as I grow older, I admire kind people.”
― Rabbi Abraham Joshua Heschel 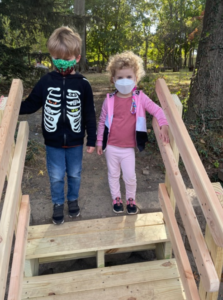 You may recall that in the early 2000s we purchased the house and property directly behind the temple in order to have the space to expand the building. When the crash of 2007 occurred we scaled back the project. The property was sold, but in the process, we subdivided and kept a large parcel at the back. It is now the space we refer to as the campground.

After finally getting approval from the state to use the space for preschool it has quickly become one of our youngest TSTIers’ favorite spots.

But this Shabbat Message isn’t really about the campground. It is about the kindness on display each day. Let me explain.

Our preschoolers and their teachers have been making serious use of the campground since preschool started in September. It is also being used by a kindergarten class which has been conducting an “archaeological excavation.” (They found a complete bottle from the late 1800s last week!) 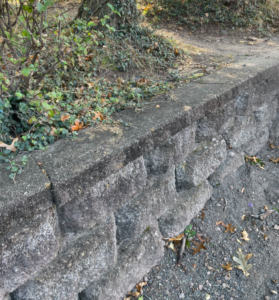 The problem is that in order to get from the driveway into the campground, everyone, regardless of age, had to climb onto the retaining wall that runs along the driveway next to the building. The retaining wall is too high for most preschoolers to climb without help and, for most adults, there was simple no graceful way to get up.

Tom is the security guard who is with preschool each and every day. But Tom isn’t just a security guard. Tom’s become part of the TSTI family. He knows every student by name. (He recently quipped to me that when the pandemic is over and he can see more than just the students’ eyes, he will have to relearn all their names.) And while his job is to keep everyone safe, he has been the first person to step up and volunteer if, for example, something had to be moved.

Tom apparently watched the kids and their teachers struggling to get over the wall in order to get to the campground and decided to do something. 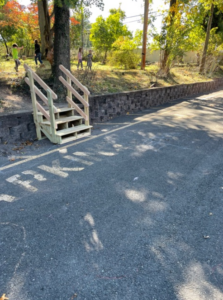 Without telling anyone, Tom spent a weekend building a set of stairs so everyone could easily get over the retaining wall and into the campground. When we thanked Tom, he demurred, saying, “Not me, check with the campground fairies.”

But the story doesn’t end there.

If you take a look at the stairs Tom built you’ll notice it has three sets of railings. Tom built the stairs in a manner that took into account people of all heights and ages. Tom just started working with us but he already knows who we strive to be as a congregation. He understands that if even one person is unable to get into the campground, we have failed as a community. But, thanks to his efforts, the space is now accessible to everyone. 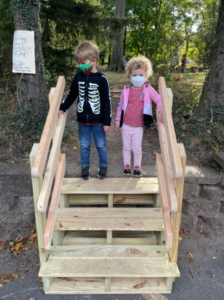 Tom wasn’t asked to build the stairs and he only grudgingly took credit for doing so. But as I watched him watching the classes going up the stairs and into the campground this morning, I could see him smile. He knows the impact he had. And while it may look like a small thing… his kindness has already made a huge difference.