Exciting news for this Shabbat!

We were thrilled to serve as the host venue for SOPAC’s Chanukah concert with Nefesh Mountain last night. All who were present were treated to the amazing talents of Eric, Doni, and their incredibly talented band.

We are THRILLED that our Chanukah Shabbat service this evening will feature the music of Nefesh Mountain. Join us on Zoom with your chanukiah and candles. We’ll begin by lighting the menorah together and then, as a community, welcome Shabbat with some of the most innovative Jewish music. (Members, see your email for Zoom login details.) 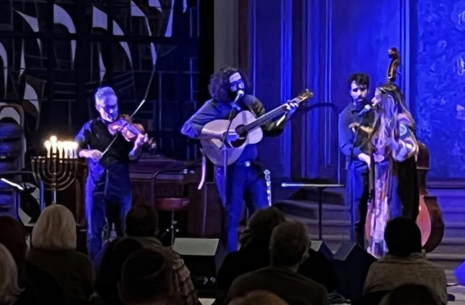 This past week I found myself thinking quite a bit about Billings, Montana. You may recall the story.

In 1994 racists and white supremacists had taken up residence in Billings and were making their presence known in random, hateful ways. One night a cinder block was thrown through a window of the home of 5-year-old Isaac Schnitzer. The window had been decorated with a menorah. (That same night a beer bottle was similarly used to shatter a different menorah-garbed window, but that incident gained little attention.)

In response, several local churches began handing out photocopies of menorahs and the local newspaper published a black-and-white picture of a menorah as well as an op-ed denouncing the growing hate in the city. That was followed by a full-page color version of the menorah, and several local businesses began printing and distributing paper menorahs. Within a few days, thousands of menorahs were on display across the city.

The menorah campaign was the brainchild of Rev. Keith Torney of the First Congregational Church and Margie MacDonald of the Montana Association of Churches.

“This was just getting to be too much,” Torney said, according to an LA Times report. “At first, the homosexual community was being harassed. First the gays, then the black community, but it seemed to me they kind of hit their stride in the Jewish community. It’s like they’re searching around to get attention.”

In other words, at a time of growing darkness in Billings, two religious leaders lit a spark. But it was only when that spark spread, and others joined with them that the spark became a bright and glowing fire. A town billboard summarized the efforts succinctly when it said “NOT IN OUR TOWN! NO HATE. NO VIOLENCE.”

Torney and MacDonald could not impact their community on their own, but they became the catalyst for the larger community to come together. And they did, as civic leaders, churches, businesses, and countless private individuals made their revulsion over the growing attacks clear.

But that is not the entire story.

The spasm of hate only created more resistance.

In response, more residents put menorahs in their windows until it became impossible to know which homes belonged to members of the Jewish community and which did not and, as one person stated, “It became physically impossible for the hate groups to harass and intimidate thousands and thousands of Billings citizens.”

The residents of Billings understood that, as the Talmud teaches, “Silence is like a confession” (Bavli, Yevamot 87b) and that, as Rabbi Abraham Joshua Heschel stated, “The opposite of good is not evil; the opposite of good is indifference.” They refused to be silent. They were unwilling to be indifferent. So, they stood together and said “No!” to the growing hate in their city.

The story of Billings, Montana is an inspiring one. It reminds us that hate must be responded to with love and that only light can push back when darkness encroaches upon us. But it also reminds us that addressing hate is a long, ongoing process. The menorahs in the windows in Billings did not stop the violence. But it did let the Jewish residents of Billings know they had the care and support of their neighbors. And it did send a message to those who were prone to hate that they were in the minority and their actions would not be tolerated.

Almost thirty years later I fear we have not learned the lesson of Billings. Our society has come to accept too much ugliness. We see antisemitic attacks at their highest level in years. But there is relative silence from other religious leaders or our elected officials on both a local and a national level. We see hateful rhetoric levied by one member of Congress at another with little attempt to hold them accountable for their ugliness. And we see too many people retreating to the safety of their homes rather than coming together in unity to say, “NOT IN OUR TOWN! NOT IN OUR STATE. NOT IN OUR NATION. NO HATE. NO VIOLENCE.”
Too often the silence is deafening.

The light of our Chanukah menorahs will continue to grow for a few more days. But, after Sunday night, they will go dark once again. Ultimately, we need to be the light. And we need to reach out to others and invite them to join us. That is the only way we will be able to address the darkness. It is the only way to push back on the racism, Islamophobia, homophobia, antisemitism, and misogyny we see taking root in our towns and at the highest levels of government.

Standing together did not eliminate the hate in Billings. But it was one step toward addressing it. It is past time for us to all take that same step… together.