Among the most insidious anti-semitic tropes that has reared its head time and time again is the claim that our Jewish community controls the world’s wealth, politics and media and uses this control for nefarious purposes.

It is this ancient hatred that is embodied in the “Great Replacement Theory” chanted by the Nazis who marched in Charlottesville. As you know, this conspiracy theory, which originated in France, claims that “replacist” elites (in the American version of the conspiracy theory that means Jews) are actively working to demographically and culturally replace “real” Americans (read: white Christians) with non-white peoples through mass migration and demographic growth. And while “The Great Replacement Theory” is a relatively new conspiracy theory, it is rooted in the age-old belief that our Jewish community secretly holds enough power to be puppet masters pulling the strings behind the scenes to help this happen.

Perhaps more concerning is the fact that the Great Replacement Theory has found its way into the community that embraces the QANON conspiracy, and is now “socially acceptable” enough that it is appearing in venues such as Tucker Carlson’s program on Fox Entertainment.

This sort of right-wing extremist rhetoric is dangerous and is, sadly, among the reasons we have had to address our security needs in ways I never before imagined.

But lest we think such hatred is the exclusive domain of the extreme right, I give you the Boston “Mapping Project.”

Released last week, the “Mapping Project,” as they are calling themselves, claims to be the work-product of the Boston-area Boycott, Divestment and Sanctions Movement. (And while that MAY be the case, we can’t know for certain, because the people who funded, created and disseminated the piece have cowardly hidden behind the veil of anonymity.)

As an article in Jewish Insider notes, the group, “…alleges sinister connections between Jewish and pro-Israel groups across Massachusetts and government, politicians, the police and the media, and blames these groups for a range of nefarious activities. The group plotted the locations of the organizations on an interactive state map — drawing lines between the Jewish groups and institutions the project claims they influence…”

For example, according to this group, the ADL is complicit in: “Colonialism, Militarization, Policing, Prison-Industrial Complex, Propaganda/Normalization, Surveillance, US Imperialism, and Zionism.” They go on to note that the organization “uses their resources to surveil and police Black, Brown, and Indigenous peoples in the US as well as worldwide.”

Like any organization, ADL isn’t perfect, but this canard is the exact opposite of the organization’s mission which is, “To stop the defamation of the Jewish people and to secure justice and fair treatment to all.” Sadly, anyone who reads this site and is not familiar with the ADL would never know that.

In addition, as you might expect, the group also goes after AIPAC. They accuse the organization of, among other things, employing propaganda in support of their “colonialist goals.” As a longtime AIPAC activist who believes in their laser focus on strengthening the US-Israel relationship but is personally struggling with their new approach that gives direct donations to political candidates, this is anything but the truth. In fact, part of why AIPAC can be a bit polarizing at times is because they are exceptionally open and honest about who they are and what they seek to do. (And it is worth noting that they are vigilant about making sure they work WITHIN the legal and governmental system.)

The group is also targeting another pro-Israel group and claims that it too is complicit in “colonialism, propaganda and Zionism.” It is one of the rare occasions when AIPAC and JStreet are being viewed through a similar lens.

Those are just three examples of an interactive document that lists every Jewish organization in the Boston area along with countless non-Jewish organizations that have ties to Jews or Israel. These include NGOs, law enforcement and educational institutions such as Harvard and MIT.

At a time when antisemitism is growing exponentially in our nation, this “document” is a roadmap for anyone seeking to harm Jews, Jewish organizations and those who work with us. It attacks rather than engages and, as previously noted, does so anonymously.

But it is worse than that.

You see, while the group, “…plotted the locations of the organizations on an interactive state map — drawing lines between the Jewish groups and institutions the project claims they influence” in the same document they “released the addresses and names of some of the groups’ staffers.”

The document contains a who’s who list of the leaders of the Jewish community and, at times, released personal information that could put those people at personal risk. Among those names are my wife Raina’s boss at the ADL, a dear friend who is a member of our TSTI community, and others who are friends and colleagues of those of us who are professionally committed to our Jewish community.

This is serious stuff and it is incitement against our friends, our colleagues and our neighbors. And it is coming from the extreme left.

We are living in a time of extremes.  And while it is easy to point a finger at the violent extremists on the far right (and we must because the threat is real), we also need to be conscious of what is happening on the other extreme. It may not be as violent but it is no less insidious. And it is growing bolder and more organized than ever.

And it is why I am more grateful than ever that organizations such as the ADL exist. 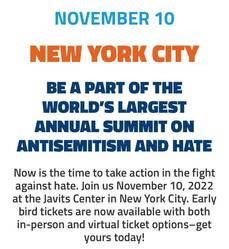